The Rise of the handheld

In 1989, a revolution began. Not a political one, not a cultural one, but a handheld one. Having dominated the home console market since 1983 with the release of the Famicom in 1983 and its western counterpart, The Nintendo Entertainment System (NES) in 1985, Nintendo wanted more.

Gunpei Yokoi, Nintendo’s chief engineer and creator of the classic Game & Watch handhelds, approached Nintendo President, Hiroshi Yamauchi and told him that he could make a handheld system that could have interchangeable games. Yamauchi was impressed and so began the development of what would become the legendary Gameboy.

Released in April 1989, the Gameboy was an instant hit and while not as powerful as the NES, gamers around the world could now play their favourite Nintendo franchises on the bus, train or in the back of the car. Road trips never had to be boring again!

Watching this handheld revolution unfold with great interest was Sega of Japan CEO Hayao Nakayama.  After successfully launching their 16-bit console, the Megadrive and seeing an opportunity to further eat into Nintendo’s market share, the decision was made to develop a handheld device of their own.

Sega’s new handheld was developed under the codename Project Mercury. This continued the trend of Sega consoles using planet names as codenames in development. The Sega Game Gear was intended to be a portable Master System.  Michael Katz, the then newly appointed Sega of America CEO, chose the name ‘Game Gear’ and the handheld was designed to be more powerful than the Gameboy.  Because of this, Sega decided to use a full-colour screen. This would give it a major selling point over the Gameboys monochrome screen.

When designing the Game Gear, Sega considered the form factor of the Gameboy and looked for ways to improve. The Megadrive was marketed as a cool, more mature system so it was vital Game Gear fit this aesthetic. Rather than take the same approach as Nintendo and use a vertical orientation, Sega chose to use a horizontal design. Similar to the Atari Lynx, curved edges helped kept the design sleek. This brought it more in line with the shape of the Megadrive controller and made the system more comfortable to hold.  The final design attempted to find the middle ground, being slightly bigger than the Gameboy, but smaller than the Atari Lynx.

The screen is full colour and the system has a colour palette of 4096 colours, which is far superior to the Master System’s 64.  While the colour screen and more powerful processor are major features, this came at a cost to battery life. The system requires 6 AA batteries which can only power the system for 3-5 hours as opposed to the Gameboy’s 30 hours on just 4 AA batteries.

Game Gear games were to come in the form of interchangeable cartridges. Like the Gameboy, these come came in plastic cases for storage which was a nice touch. As a pack-in game, Sega included Columns, hoping to latch onto the Tetris craze that was introduced with the Gameboy.

Launching in 1990, Sega was ready to push the Game Gear as a Gameboy killer! As usual, in Japan, the marketing was more reserved and respectful of the opposition, as is the culture in the land of the rising sun. Releasing at 19,800 yen, sales were strong in the first 2 days, shifting 40,000 units. This increased to 90,000 in the first month. A strong start.

However, in the rest of the world, the gloves were off. Sega of America and its European counterparts had done a stellar job marketing Sega as the cooler, more mature brand as opposed to Nintendo’s kiddy, toy-like presentation of the NES and Gameboy.  This Sega attitude would feature heavily in the promotion of the new handheld. Side-by-side comparisons with the Gameboy were used to highlight the colour screen of the Game Gear.

Sega even took shots at Gameboy players calling them fat and stupid!  This shock marketing proved to be very effective. Who can forget the Sega Scream!

The US and European releases

The Game Gear launched in April 1991 in the US with heavy marketing from Sega of America.  They would go out of their way to bash the Gameboy and this initially worked. Commentators would claim that the Game Gear was far superior to the Gameboy and that it would be dead in 2 years.  While this was not the case, the Game Gear still shifted 4 million units in North America by the end of 1993.

Delays meant that PAL territories were the last region to see the release of the handheld. Launching in mid-1991 at £99.99, it was more expensive than the Gameboy. Many felt that the colour screen justified this higher price though. In the UK, the system would go on to take a 16% market share by January 1992 increasing to 40% by the end of that year.

THE LIFE AND DEATH OF A SEGA HANDHELD

The Sega Game Gear was officially supported by Sega from 1990 to 1997. Over the course of its 7-year lifespan, 364 games were officially released for the system.  Most of the major Sega franchises were represented in portable form. Sonic the Hedgehog came through with 8 major releases. Streets of Rage, Shinobi, Golden Axe, Ecco the Dolphin, they’re all there and with varying degrees of success. Game Gear enjoyed good 3rd party support, particularly from Disney. A number of quality MIckey Mouse and Donald Duck titles were released on the handheld.  The library is wide and diverse.

The end of the road

Despite heavy marketing from Sega and strong software support initially, the Game Gear would not manage to make much of a dent in the handheld market.  Sega’s focus was firmly on the home console market and maintaining their advantage over Nintendo. This would come at a cost to the Game Gear, quickly becoming an afterthought for the company.

The 32X and Sega Mega-CD further impacted the already waning support for the portable.  With Sega Saturn also fast approaching, Game Gear was in rapid decline by 1994. The Sega Nomad, a handheld variation on the Megadrive released in the US in 1995, failed to capture the imagination of gamers and was quickly discontinued.

The release of the smaller Gameboy Pocket in 1996 however helped seal the Game Gear’s fate alongside a brand new franchise from Nintendo. Pokemon breathed new life into the Gameboy and cemented Nintendo’s dominance in the handheld market forevermore.

THE RESURRECTION OF THE GAME GEAR

By the end of 1996, the Game Gear had sold 10.62 million units worldwide, but the writing was on the wall. Sega ended support for the system in 1997, never to return to the handheld market. Although the system was licensed by Majesco in 2000 and re-released at a budget price, Sega officially discontinued the system in 1997.

During its lifetime, the Game Gear was considered somewhat of a failure. Many systems sitting in their owner’s lofts or cupboards, the notoriously bad capacitors slowly failing. However, in recent times, there has been a renaissance in collecting and modding the Game Gear.  With new capacitors and an upgraded screen, the system suddenly becomes a much more appealing prospect.

A retro handheld for the 21st century

In 2022, it’s possible to bring your Game Gear into the 21st century with screen, board, speaker and battery mods. The end result is a handheld that suddenly fulfils all the promise it had back in 1990.  The system is kept alive by a passionate community of modders and collectors who have been championing the system since day 1 and are excited to bring new people into the Game Gear scene.

The Sega Game Gear may not have toppled the Gameboy, but for many years, it was the closest anyone got to even challenging the might of Nintendo’s handheld domination.  For that, it deserves credit and for anyone new to the Game Gear, give it a try.  Pick up a system with a new screen and I challenge you not to love it.  I promise you, you won’t regret it. 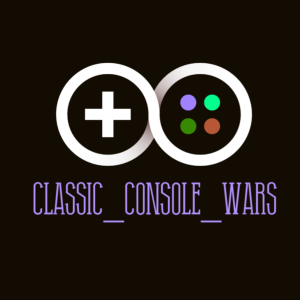 Tom is the creator of @classic_console_wars on Instagram. A self-confessed Sega kid, Tom was raised on Sega consoles becoming a Nintendo fan in the N64 era. A video game collector and enthusiast, Tom is passionate about retro and modern gaming. Favourite GameGear game - Sonic the Hedgehog
All Posts
Twitter Instagram
Tags:Game GearSega